skip to main | skip to sidebar

No more 'jollies' for Bishop Cooper 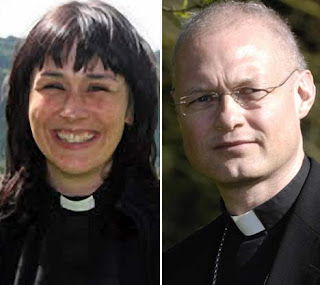 Games up. In Bazzars world skeletons are no longer kept in the cupboard. Instead, they hang from the chandeliers folks !

Former bishop of St David's Carl Cooper of the Church in Wales became so enamoured with his chaplain Rev Mandy Potter that he flung his mitre, wife and kids in order to be with her by night and by day.

Eventually, following three years of living in sin, gowermaster can reveal , through provincial contacts, that Rev Mandy just couldn't resist running off with another bloke yet again. Wow !!!

We also hear  rumours that  His Darkness, regards this latest episode as being  somewhat  morally repugnant and slightly dishonest, but vows to pray for all those concerned.

Anglo Catholics 'Credo' are thought to be calling for disciplinary action. They have demanded to know on what grounds of adultery the cricketing mad bishop will be charged. To which Bazzar's Registry has at long last replied : The Lords, Trent Bridge and The Oval.    ﻿

As a member of the priesthood of women, soon expected to be ordained bishops, Mandy could well be cautioned and advised, that in future, if it can be tastefully done, she keeps her clothes on.

Meanwhile, Rev Mandy, is compared to Lot's wife, who, 'Was like unto other women, until Lot turned and gazed at her. Whereas, she became a pillar of salt by day and a ball of fire by night'.

Remember ! This is bazzar's church. You just happen to be in it .